E bike tour – Let’s discover and taste together another Alba

When you book with an account, you will be able to track your payment status, track the confirmation and you can also rate the tour after you finished the tour.
Sign Up
1998
Availability : Group tours. Price and dates refer to group departures of minimum 4 people. For private tours ask us for information!
Min Age : 12+

The E-bike tour that we propose in Alba is a medium-length route, but with a strong emotional and landscape connotation and was born with the clear intention of making known lesser-known places and ravines of the small town in the province of Cuneo, famous all over the world for its truffles, but unknown if observed from some angles and perspectives. It will be a real discovery… 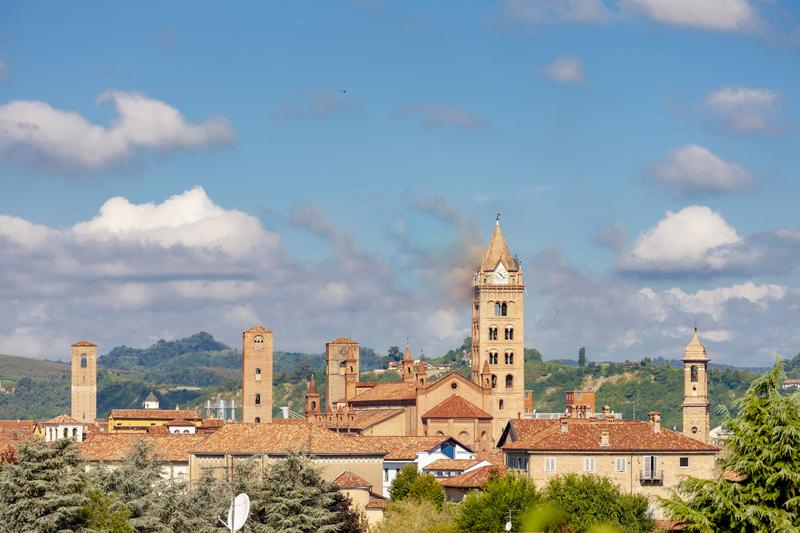 The price does not include

Breakfast and then off we go!

Before leaving we will have a tasty typical breakfast, based on piedmont hazelnut biscuits, a first moment of sharing, goodness and beauty, surrounded by the hundred towers of the center of Alba, waiting to live many others during this unforgettable day.
But it will be time to get on the saddle and pedal towards the countryside, towards Frazione Madonna di Como, where we will make our first stop at the Mario Rivetti – Cascina Serre Farm.

The first stop on the roof of the Langhe

A family-run winery, Cascina Serre was founded in 1930 and since then produces with passion and commitment excellent typical wines such as Dolcetto d’Alba DOC or Barbera d’Alba DOC, the same wines that we will have the opportunity to taste during this first fascinating alba stage.

Resuming the journey we will head towards the Pietro Rinaldi Winery, another interesting small local production reality that for four generations has been producing wines taking the utmost care of the territory through the constant work of qualifying the vineyards, respecting the environment and tradition. In the Pietro Rinaldi Winery natural techniques have over the years replaced chemistry both in the cultivation of vines and in winemaking, leaving room for genuineness and quality in the bottle, with constant attention to the goodness of the products. We will taste the wines of Pietro Rinaldi in the setting of the Relais Miaclara, a charming and elegant residence managed by the family, where it will be even more suggestive and exciting to enjoy this moment.

After this stop in the name of nature and good wine it will be time to leave for the hamlet of San Rocco Seno d’Elvio, where cycling we will meet the Manuel Marinacci Farm, a young production reality that extends over only 4 hectares and where the excellence of the territory is reported in the bottle, in particular in the Barbaresco DOCG, an elegant and caressing wine, true flagship of the company’s production.

Third stage and the typical picnic

Resumed the journey we will pedal on the towards Poderi Colla, where we will know a company with a long family tradition, of which we find news since 1700 and that reaches us, today, when Tino and Federica are the heirs of this long tradition and continue with passion and enthusiasm to produce the excellent wines that we will have the opportunity to taste during this Alba stage.

The stop will be extended here to enjoy the typical Picnic with the selection of products by Chef Diego Bongiovanni, a delicious and restful break in front of beautiful views, that is our way of not making you want anything better!

Fourth stage and the Fortresses of the Seven Brothers

Refreshed by the picnic we will resume our ride through the hills surrounding Alba, admiring a unique panorama, made of rows, horizons and sky that will suddenly stop opening the gaze to an unexpected scenario: the Rocche dei Sette Fratelli, a natural chasm that extends into the land downstream for almost 9 hectares, between the Municipalities of Treiso, Alba and Trezzo Tinella.  Originated over the millennia by the erosive action of the water that has consumed the marly soil of marine origin, the Rocche will present themselves unexpectedly to our eyes as a spectacular gray-white amphitheater, completely uncovered and devoid of vegetation that, due to the too steep clay walls, can not grow. Legend has it that the name of the Fortresses derives from the story of seven brothers who, hurled themselves with anger against God, were swallowed up by the earth that would open under their feet hearing their blasphemies and their anger.

After this unexpected and evocative “local canyon”, we will pass through the municipality of Treiso and then return again to Alba, to visit the Manera Farm, a cellar consisting of four historic farmhouses typically “Langhe”, exclusively family-run and strongly anchored to tradition.

Today, the company looks to the future thanks to the arrival in the company of his wine technician sons Gabriele Daniele and Carlo, who produce the wines with a mix of traditional and modern techniques. For the care of their vineyards, integrated pest management, organic fertilization and targeted thinning is practiced, all in order to produce better grapes for unique wines.

Fifth stage and the journey is coming to an end

After leaving we will cycle to the last stage of this Alba tour: the Adriano Marco and Vittorio Farm, where another beautiful family story will await us and where wine will be the protagonist again, together with this magical and suitable land that also in this case has managed to involve and inspire even the younger generations. Deep love for tradition and an innovative green philosophy is today what binds and supports the company today, a small reality that aims at an increasingly clean and ecological production, but without ever forgetting the quality and goodness of the product.  Because by loving the land and wine, everything is possible!